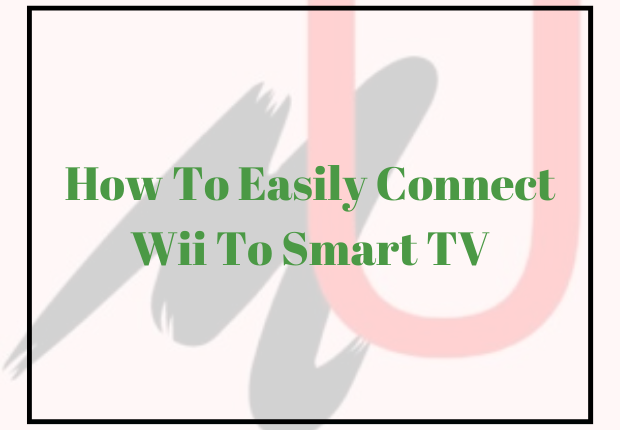 How To Easily Connect Wii To Smart TV

To Easily Connect Wii To Smart TV: Use the AV multi cable that was included with your Wii to connect the console to the TV and the other end to your Wii to your smart TV.

If the TV does not support Composite video, you should purchase an adaptor for one of the inputs that the TV supports.

For more information on the adapters you’ll need for each TV input, keep reading to learn more.

How To Connect Wii To Smart TV

Observe the following guidelines to ensure a successful connection.

Check the inputs that your TV can receive.

To connect to your TV, a Nintendo Wii only has an AV Multi Out port, however the connector that is included with your Wii system by default only works with TVs that have Composite video input.

Your Wii could also feature an HDMI out connector, depending on the model.

For Composite video, look for the RCA color-coded wires on the back and sides of your TV.

If you have such ports, you may utilize the Wii’s connection to link it to your smart TV.

If not, you might need to use an adapter to alter the console’s input to one that your TV can accept in order to connect it to the TV.

Use The Default Wii Connectors

On one end of the Wii’s standard connections, which are three colored RCA cables, there is a special connector that can only be used with Wiis.

Connecting your Wii to the TV is easy if your TV supports composite audio and has these three connections on the back.

Connect the Wii’s AV Multi out cable to it, then the colored wires to the smart TV’s corresponding ports.

Your Wii input won’t be HD 720p or 1080p since Composite video can only handle 480p-resolution video.

After connecting the wires on both ends, turn on the console and choose TV or AV for the TV input.

You can start playing games on the console if the picture appears on the TV once the console has switched on.

You’ll need to purchase a Wii A/V to HDMI converter before connecting the system and the TV if you want to connect your Wii to a smart TV with an HDMI connector.

Given that it is a high-quality item that is well-made and accomplishes its intended purpose, I would suggest the Hyperkin HD Cable For Wii.

You could connect the TV to the Wii without either an HDMI cable or an AV Multi out cable if you used this connector.

It is a fantastic alternative to the HDMI and AV cable because of its nearly 7 ft length.

Attach the AV Multi end of the cable to the Wii’s port and the other HDMI end to the TV’s HDMI port.

Turn on the console and the TV, then change the TV input to the HDMI port to which the adapter is attached.

You should be able to view the console’s home screen if everything is connected properly.

You can only get a 480p or 578i standard definition signal since some Wii systems do not support HD 720p or higher.

Even if your TV has HDMI CEC compatibility, the console won’t be able to use it.

These connections have 720p and 1080p capabilities, however the output device must likewise support these resolutions.

I advise you to get the Component video adaptor from Nintendo if your TV supports it.

To enable the Wii to be supported on additional TVs, Nintendo has created this approved adapter.

The RCA color-coded wires should be connected to the TV and the Wii console using the adapter’s AV multi-connector and other cables, respectively.

Switch the TV input to Component In and turn on the console after connecting the wires to the respective devices.

Some smart TVs also include VGA inputs, which are typically seen on monitors and offer up to 480p resolution.

You will require an adaptor to use a VGA port, which will convert the RCA composite output of the default connection to the VGA output that the TV accepts.

Because it takes no setup and connects straight to the TV, doing away with the need for a VGA connection, I would suggest the OUOU RCA to VGA converter.

Connect the Wii to the AV multi cable, and the RCA end of the cable to the adapter’s RCA inputs.

The TV and console should be turned on after connecting the adapter’s other end to the TV.

Start utilizing the console over the VGA input by switching the input to PC or VGA.

Although the Wii doesn’t support 720p or greater resolutions, VGA doesn’t allow full HD either, thus this won’t be a problem.

Wii gives you the option to modify the visual output resolution between 480p and 576i, so you can get the most out of the input you’re using.

If the colors on the screen or the borders start to extend to the sides, adjust the other display settings.

The performance of the console won’t be negatively impacted by using an adapter, and if there is input latency, it’s likely due to your TV or Wii rather than the converter.

Because the hardware in the system is incapable of running games at high resolutions with playable framerates, older Wiis don’t support HDMI.

How to connect Nintendo Wii to a Smart TV?

Just put one into your TV, attach it to your Nintendo Wii with an HDMI cord, and you’re ready to go. Using Input Select on your TV remote, you can see the output on the HDMI channel. With a specific Nintendo Wii HDMI converter, Wii to HDMI is a quick and easy way to connect your Nintendo Wii to any smart TV.

How can you connect a brand-new TV to an old Wii?

Why is my TV unable to detect my Wii?

How can I connect my Wii without using yellow to my TV? There are two ways to connect these TVs with the Wii console:

Why is my Wii unable to connect to my Samsung TV?

Why won’t the Nintendo Wii function on my Samsung smart TV? – Quora. The Wii utilized component (red (video), green, blue, and red (audio)) and composite (yellow, white, and red), not HDMI. There were adapters that could convert it to HDMI, but they are sometimes rather pricey.