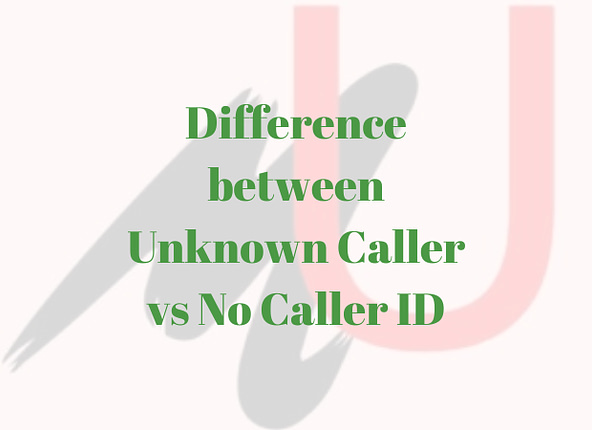 Unknown Caller vs No Caller ID: The Distinction!

In other words, the caller explicitly prevented their caller ID from being shown when they said “No Caller ID.”
“Unknown Caller” denotes a caller ID that was given but was not acknowledged.

After contacting my cell operator’s customer support to inquire about the distinction between these calls out of curiosity, they provided the above-stated response.

Additionally, they offered suggestions on how to deal with such anonymous callers, including rejecting calls and using third-party apps.

This article will offer a thorough explanation of the distinction between No Caller ID and Unknown ID in addition to several tried-and-true solutions to these annoyances.

Why Did An Unknown Caller Call?

Your telecom provider probably was unable to decipher the number on their end if you are getting calls with “Unknown Caller” displayed on your mobile device.

You may also hide your phone number by prefixing the number you want to call with *67.

Why Is There No Caller ID?

Receiving calls with “No Caller ID” indicates that the person phoning you has chosen to purposefully conceal his phone number.

That seems feasible. Yes, the caller may conceal his phone number during a call using the “No Caller ID” option that is available on certain phones.

When you activate this function, the caller’s number is purposefully hidden from being shown on your phone and the privacy flag in the network is set to true.

Unknown Caller vs No Caller ID

What makes a difference, then? If “Unkown Caller ID” and “No Caller ID” are the same, you could be puzzled.

In actuality, there is a significant difference between the two, despite the fact that they both accomplish the same goal.

As was already said, “No Caller ID” denotes the caller’s decision to conceal his mobile number by employing a unique function on his phone.

On the other side, “Unknown Caller” refers to the inability of telecom firms, owing to specific limitations, to interpret the phone number on their end.

How to Disguise Calls with “No Caller ID”

Third-party applications may show the incoming numbers if you are bothered by numerous calls from disguised numbers.

I am aware of one specific program, called “Trap Call,” which I have tried and tested and found to be efficient against incoming calls.

Through the use of trap calls, you may uncover the identity of the “Unknown Caller” ID by learning the caller’s name, address, and even phone number.

Utilizing Trap call also gives you the option to add the number to a blacklist and prevent subsequent calls from coming from it.

You might also try contacting your phone provider, which often maintains track of all incoming and outgoing calls made and received by your device.

The majority of phone companies provide an Anonymous Caller ID Service, which makes sure that a caller who has an unidentified caller ID activated will give the phone company his number in order to make a call.

However, you must first authorize this service by giving them your name, address, and the day and time you received the anonymous call from an “Unknown Caller” or “No Caller ID” number.

If you have an iPhone, you may reject calls from numbers you don’t recognize or calls with no caller ID by sliding on the red reject button that appears on the screen.

You may reject the calls if your iPhone is locked by twice tapping the lock button. 1. On your Android smartphone, open the “Dialer” app.

2. On the right side of the program, choose “Vertical Ellipsis” from the menu (three vertical dots).

1. Tap “Phone” under “Settings” on your iPhone.

2. Turn “Silence Unknown Callers” ON under the “Phone” option.

You may stop anonymous callers from phoning you and bothering you frequently by making the modifications listed above on your mobile device.

It’s interesting to note that not all unknown callers are bothersome; sometimes, placing VoIP calls might also make the caller’s phone number unavailable.

VoIP utilizes the internet to make calls, making it invisible to traditional telephony networks, in contrast to traditional landlines and wireless networks.

The majority of companies and organizations utilize VoIP to save phone costs. Therefore, the next time “Unknown Caller” calls, it may really be your workplace (tongue in cheek).

Trap Call is a fantastic program for blocking and blacklisting anonymous callers, however, it has limitations and is only available in the US. Think about this if you often travel.

However, comparable third-party applications like Truecaller have been shown to be successful in preventing calls and identifying spam calls.

However, I highly advise you to contact your phone provider or higher authorities if you often get anonymous calls and feel threatened by them in order to deal with the issue.

See How to Refrain from Receiving Robocalls and Texts

What happens if I call a random number?

There is sometimes a possibility that the “Unknown number” originates from another country. If you answer these calls, your carrier may charge you heavily.

With no caller ID, how do you return a call?

If the call was made via VoIP, you won’t be able to call back, but you may utilize third-party applications to first get the phone number and then call back.

Do you have them in your contacts if there is no caller ID?

Even if the caller is in your contacts, the absence of Caller ID indicates that they have purposefully hidden their number.

Should I respond by not showing the caller ID?

You may answer a call with “No caller ID,” but I highly advise against it since the likelihood of being conned is rather high.

How can I get free call blocking?

You may ban all incoming calls from unknown numbers on certain Android smartphones. You normally launch the Phone app and go to the Settings menu, however, the procedure differs depending on the device. Locate the number blocking option, then turn on the functionality. Additionally, you may manually add the phone numbers that you wish to ban.

Obtain an obnoxious call? To add the most recent call you received to your call block list, dial *61. To disable call blocking, dial *80.

Have you blocked the caller with No caller ID?

These calls may also be blocked, concealed, disguised, or unidentified. On an iPhone, a blocked call will normally display “No Caller ID,” however other phones may use a different word in the caller ID.

How can one detect if they have been blocked?

Calling is the easiest method to find out whether an Android user has banned you, according to Lavelle. Watch for it to go to voicemail or play you a pre-recorded message, just as with an iPhone.

What happens if someone texts you after you’ve blocked them on your phone?

SMS texts are the next significant effect of banning a number. On Android or iPhone, blocking a number prevents that number from sending you regular text messages (SMS or MMS). You won’t get the message even if it will be delivered from the sender’s side.

What Channel Number Is A&E On DIRECTV: And Favorite programs